Children and dogs, it is not always easy.

A mother recently posted on facebook that a certain dog should be put down because he bit a child. I do not comment on the case as I do not have enough information.
However, what got to me was she said next. That she had lovely children who would run up to every dog to say hello and that she could not stop them.
She does not think it is necessary to teach her children to respect dogs and the space some need but that it was ok that they just run up to unknown dog.
On the other had if something happened it was crystal clear that it was the dog’s fault and only the dog’s fault.
This really makes me sad. I think it is important that children are taught how to be dog safe. It is obviously also important to socialise dogs well and teach them to be good canine citizen.
But it goes both ways and children and dogs have to learn to respect others.
It has happened to me walking two big dogs and children would just run up to them, one child even hugged Zorbas, without asking. Glad he is well socialised with kids! 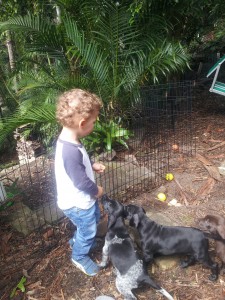