What is choice in dog training? 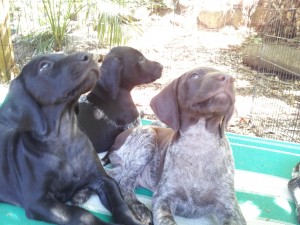 I have been talking about choice in dog training for a while now. And I am talking about the dog’s choice and a real choice!
Some might remember that you were told to show the dog food in your hand, if the dog tries to take it, close your fist and do not let him have it. If the dog backs up then reward for this ‘choice’.
This basically tells the dog ‘In order to get what you want you must first do what I want!’
While this might teach the dog some self control, which is not really bad, it has nothing to do with choice.
If you really want to give your dog a choice, and I think you should, start teaching him appropriate behaviours like ‘sit’, ‘look at me’, ‘hand touch’ etc. Then in situations where the dog gets either excited or apprehensive and has different choices, he could bark, jump up or lunge but if instead chooses to look at you, then he has made a real choice. I would obviously then reward this. And for the records, I would in no way punish the the other choices, just calmly move away and reassess the situation.
An example might help. I was at a trial with Shellbe the other day and a friend asked her to ‘sneeze’ (she does not know that behaviour), so she got a bit confused and did not really know what to do.
Guess what, her choice was to look at me, pretty much saying, can you explain what this person wants. Isn’t that great!