Do you really want and need to go to the dog park?

The other day I observed a ‘conversation’ between humans and dogs at an off leash area. There is a person at this park with a group of very large dogs (about 5). The person and the dogs think they own the park.
She will tell everyone that her dogs are friendly, despite them ganging up and bullying other dogs and to just let them sort it out. In her opinion it is a crime to take treats to the park or actually control a dog’s interaction or play.
So three of her dogs where bullying another dog, this poor dog was on her back continuously trying to avoid being harassed but no one felt it was necessary to intervene and manage the interaction so all dogs could actually enjoy their time in the off leash area.
The good old times when we let them sort it out are well and truly over.
Imagine this. You are at the playground and your child gets bullied or your child bullies another child. Would you just watch and hope for the best.
Of course you would not! And the same goes for the dog park. Play and interaction needs to be supervised and managed for the enjoyment of all.
I did not intervene as I do not give unsolicited advise. 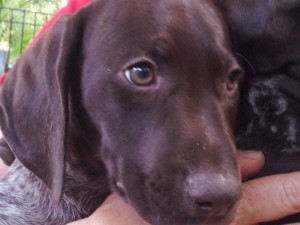 That is Superman, he is 8 months now and loves the dog park!